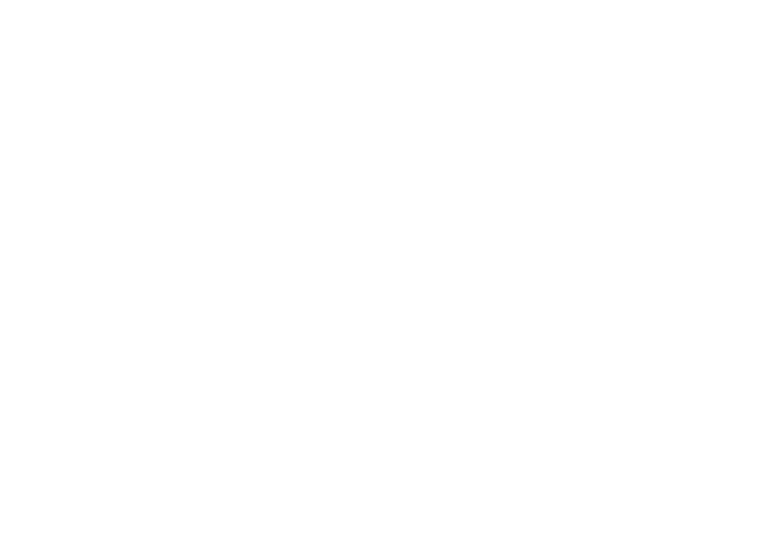 The Moment You Met

Do you remember the feeling you had the moment you met your animal companion/s? Right now, try to remember that moment and feeling as you read on. 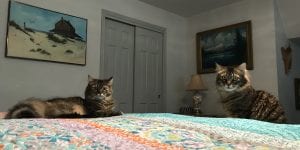 This past Memorial Day weekend, Luna & Max celebrated their 3rd birthdays. I love celebrating birthdays and anniversaries. It is important to celebrate, remember and reflect, giving gratitude for another trip around the sun. 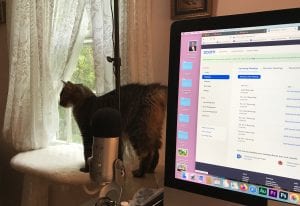 This morning, as I was getting ready for a live meditation via ZOOM, I asked my animal friends and companions for a topic to focus on during the meditation. At first, I was directed to the topic of self-care and self-healing. I love that topic because the group is about meditating and healing with our animals, but just as I opened the live meeting, the topic of remembering what it was like when you first met your animal companion came into my mind.

My heart melted and smiled at the same time. I always try my best to listen to animals and what they have to teach and share. We were not let down. 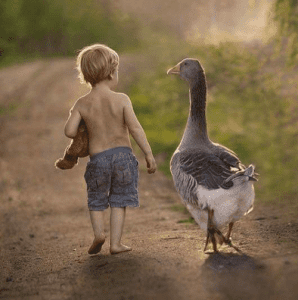 I’m feeling that it might be fun to go on a little journey together right now, followed by a short, guided meditation that you can practice with your own animal companions below.

Begin to remember the first time you met your animal companion(s) that are living with you right now. Remember how you felt the moment you first saw each other, and I will share with you my own journey and memories. 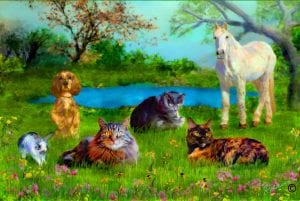 The animals in the painting above are from my life up to 2012 (except our parkette Teko, from when I was a toddler). It is interesting remembering when I first met each of them and how I felt in that moment.

Trixie, the cocker spaniel, is a very distant and fuzzy memory of the moment we met. I must have been all of 5 years old and I believe we first saw her as a little puppy with her siblings. I remember the feeling of joy and wonder I had when I saw her that day. Such little tiny beings. I don’t remember the day she came home, but we grew up together. She crossed the rainbow bridge in 1970, just before my high school graduation.

Uncle Bun. He was an Easter/birthday present during my junior year in college. I was told he was a little girl. She was so tiny she fit in the palm of my hand. I could not have been happier and filled with such delight and joy. The painting makes him look so tiny, but he was huge. As big or bigger than most of the kitties that I have lived with. Oh, the adventures the 2 of us had. 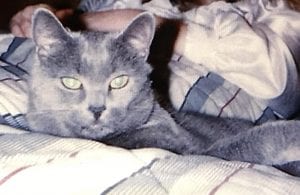 Cleo (the gray kitty) came into my life on the same day that my husband and I began our journey of life together. I did not know how to feel about her. I was not allowed to have a kitty when I was growing up because my father was highly allergic. The first moment we met she walked into the room where we were watching an episode of Leave it to Beaver. He introduced us. She looked at me and then proceeded to walk over to Bill, jump up on his lap and nuzzle him nose to nose. It was precious and I KNEW he was a really good guy if they had that kind of relationship.

Cleo totally changed my life for the better and is the reason that I do the work that I have the great honor of doing. One Christmas, Bill gave me a license plate that says “4 CLEO”, since everything I do is because and for Cleo. 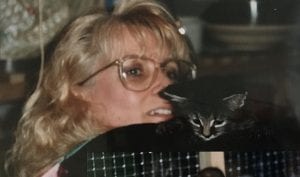 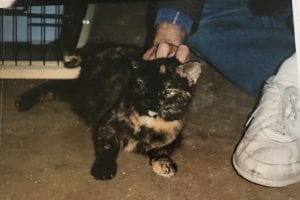 Sammy (long haired tabby) & Katy (torte with tortitued!) were living in the basement of foster persons. Originally, we visited to meet siblings, but Katy called to Bill and got him hook line and sinker. Sammy was 4 weeks old and he got me heart and soul. I will always remember the first meeting and every day after that. They were with me during my beginning years of my animal work and continue to this day. 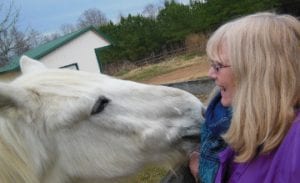 Nathan is the handsome white horse in the painting. He was not “my” horse, but if my yearly birthday wishes for a horse had come true, it would have been him. I met Nathan the day after he arrived at Traveller’s Rest Equine Elders Sanctuary. He came there for hospice and was not to make it more than a few days. When we met and I was able to get past his outside package, I knew I was standing in the presence greatness.

Oh, he hooked me big time. How I felt? No words can possibly describe the feeling other than beyond my human experience. He told me that he was not going to die then, and that he would be a great teacher for many, including the veterinarians. He did just that. His story can be found here (link). Every time I was with him, my heart would burst with joy.

Katy was the last to cross the Rainbow Bridge. We had a very empty house. At that time, my father was my full-time job and we felt that no animal or living being deserved to live with a human that was under so much stress. 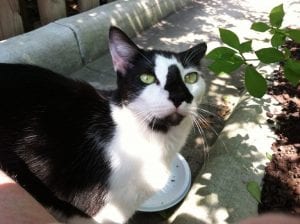 Rudy had another idea! This is the day after I first met Rudy. We thought he was a she. NOT! He was starving and living near the dumpster of my dad’s assisted living facility. When we were introduced, he came from behind a fence yelling so loud and so excited. My thought was who could live with that? He went up to everyone that was at my first meeting including a wheelchair and a walker and was not afraid at all. After eating, he rolled over on the pavement in the parking lot and wanted belly rubs.

I did not have the call to bring him home at that moment because of my concern about my stress. The moment that my husband saw him, he declared that the kitty needs a home. Rudy called him… thank goodness! The next day, I “captured” him, took him for a checkup and brought him home. After just 30 minutes, you would have thought he had lived there his whole life. It was the most amazing experience.

Rudy’s and my first moments were more of a feeling of wonder. For him, it was all about survival and food along with some gentle human touch. No hearts, flowers, violins playing in the heavens, but the moment he was home something on a deep unspoken level happened and grew every day for the rest of his life with us. 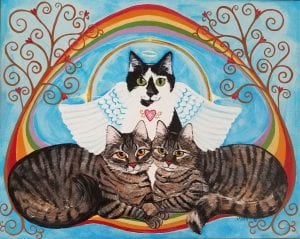 The painting above was inspired and is very personal.

Rudy was diagnosed with an incurable and aggressive form of cancer 3 months after my father passed. Rudy beat the odds by surviving 7 more months, but his loss was by far the worst I have experienced.

Moments after he passed, Bill received a “message” from Rudy to share Rudy’s home with someone new because there are so many out there that need a home. We have never done that before, brought home a new fur baby right after someone passed, but we told Rudy that we would do our best to keep our hearts open.

Rudy sent us to Luna and Max. 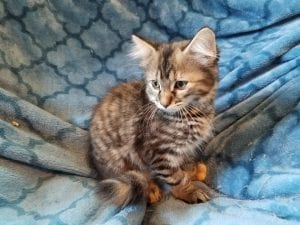 The first time I saw Luna was in a photo. I fell in love for some reason. There was nothing that would change my mind. When we first met, she, her 3 brothers and mommy, had nothing to do with me, but Max called to Bill. 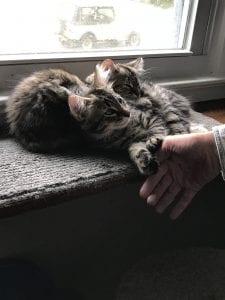 It was so beautiful to see them physically connected and I felt Bill’s heart open. That was it! They were ours and we became theirs in that moment.

For a quick aside, the painting of Rudy and the kittens has many layers. Of course, Rudy’s wings, because he is in spirit. The heart with the diamond star represents the star we had named after him and the heart necklace that I wear every day. Rudy is watching over Max & Luna obviously and we feel that Rudy sent them to us. The trees with the curly limbs, roots and hearts were not requested by me, but how perfect. The rainbow looking arch going from one of Rudy’s wings to the other represents a sundog. I saw a full double sundog the day after my father died. The rainbow represents the smiling rainbow that was directly over our house the same time we saw the sundog. 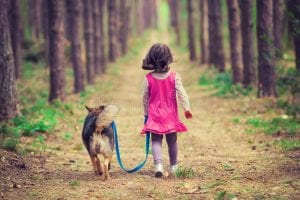 As we are walking down memory lane with our animal companions and friends, are you connecting with that beautiful moment in time that you met one or more of your animal friends?

Feel you heart opening to that beautiful unconditional love that flows between you. As you do, I invite you to join me in a short, guided meditation.

I hope you enjoyed the walk down memory lane and re-experiencing the first moment that you met your special animal friend/s. I would love to hear how it went for you.